Many years before I ever saw one, I had heard of the mystical Tam O’Shanter Hones (also called Water of Ayr Stones, Snake Stones, or simply Scotch Stones). Touted by old hands in the jewelry business as the best no-fuss way to quickly remove small amounts of unwanted solder or other blemishes on metal, these lovely stones disappeared from the market around 2000, some years after the faltering Scottish mine finally closed. You can find them on Ebay occasionally, but such an unreliable source is a poor suggestion to make to an eager student. Much better would be an answer to the question: What can reasonably replace the celebrated Tam O’Shanter Hone of old?

Tool and die makers traditionally use stones similar in size to the Tam O’Shanter Hone for smoothing steels and various other metals, including soft non-ferrous metals like aluminum and brass. Though many of these stones are designed to use with oil as a lubricant, I used water. Water works perfectly well and oil only introduces into the process the headache of cleaning the metal, and interferes with soldering and patinas along the way. Stick to WATER!

I prepared a test plate by melting 4 blobs of easy solder onto a sheet of copper and stamping on the initials of the stones I acquired to test.  Here is some information about the selection of stones I compared (if a current source is known, I include a hyper link):

Tam O’Shanter Hones – the classic. I believe this is a type of fine slate, but I was unable to find any specific information about its chemical or geological composition. It’s soft enough to cut with a regular jeweler’s saw, and shape with a regular file. One of its salient characteristics is that it conforms to the surface it is worked over, so it doesn’t gouge. Hence its traditional use to “erase” blemishes like excess solder. There is only one “grit”, which is roughly 600-800.

The unicorn of finishing stones…

Gesswein New Super Stone (NSS) Ceramic Stones – These alumina fiber stones come in grits from 120 – 1200, and sizes as small as 0.5mm x 0.5mm x 50mm. That’s the size of a mechanical pencil lead. So, yeah, they can get into really TINY spaces :). Plus the fibers are all perfectly lined up so they only cut at the ends, not along the sides, and they are very strong for their size. You can break them with a pair of flat jaw pliers, and shape them with an old file (I like that Gesswein calls out that it should be an OLD file!).

When I first encountered these, I asked for feedback from a jewelry forum, and James Binnion (whose work is gorgeous and knowledge encyclopedic) kindly responded that he loves them, asserting that, “They are the best finishing stone I have used… I can’t say enough good about them.” He went on to say, “I work through the grits just like sandpaper, coarse for rough fast cutting and then finer grades to clean up to pre-polish state. So I would vote for 180, 300 and 400 at a minimum.”  He shapes the finer grits (800, 1000 or 1200) to fit into areas he can’t reach with any other tool, smoothing the metal so that it only needs to be burnished for a final finish.

The NSS Ceramic Stones I have are 2mm wide, so I popped them into a re-purposed Staedtler 780 lead holder which made them much easier to work with. They are relatively expensive (about $12 each for the 100mm ones), but quite long lasting, so you get decent bang for your buck.

Got this 2mm lead holder at the local university book store.

Gesswein Moldmaker Finishing Stones – I found out about these stones from reading Jim Kelso’s tutorial on Japanese Patination. These are silicon carbide stones available in a range of sizes (smallest is 1/4″ x 1/16″ x 4″) and grits from 100 – 600. When I bought mine, you could order them individually, now you have to either buy a box of 12 (yikes!), or get a sample set of all 6 grits (runs about $16 for the set). Since they only go up to 600 grit, I bought another of Jim Kelso’s recommendations, a Gesswein Ultra-Soft Polishing Stone in 1200 grit. This is an aluminum oxide stone, and sample sets of these are available, too.

No-Name Brand Polishing Stones – Back in 2010, I bought a set of these aluminum oxide stones marked “Engineered Abrasives” in grits from 150 – 800 from an outfit called Wholesale Tool, which no longer carries them. The whole set of 16 stones (all 6″ long) cost a mere $8.95, which might be either a screamin’ deal or an indictment of quality. Let’s see how they measure up to the others…

Here’s the freshly minted test plate again with all the stone info slathered on the photo:

Roight! (claps hands once and rubs them together eagerly) So how do we use these, then? I did have a small jar of water in the corners of many of my pictures, but as the images were cropped to give you a better view, the water jar was lost. I will paint a picture with words…

STEP ONE: Dip the stone in the water.

STEP TWO: Rub the stone on the solder blob or blemish.

You may have to dip several times as you go along, depending on how thirsty the stone is.
That’s it. Tres simple :).  Here are some notes and pictures for each stone:

Tam O’Shanter Hone – Not a terribly thirsty stone, makes a nice slurry quickly, but the slurry does make it hard to see what effect you are having. I push the liquid to one side with the stone to check progress, or use a tissue to wipe it away for an even cleaner view.

Gesswein NSS Ceramic Stone – According to Gesswein, you don’t need lubricant of any kind with this stone. In the interest of uniformity of testing (ok, truth, I forgot…), I used water, and you can see that the stone does not, in fact, break down very easily, since it forms no real slurry. Does makes it easier to see what you are doing. You probably want a wider stone than 2mm if you are going to be tackling large areas.

Gesswein Moldmaker Finishing Stone – The thirstiest stone I used. This one hoovered up the water and the slurry quickly turned to a thick paste. Just add more water to keep going. The up side of the quick breakdown of such a stone is that you can use a toothpick and the paste that forms to get into areas that the whole stone can’t reach. 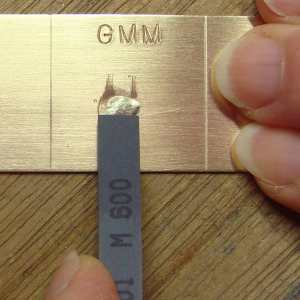 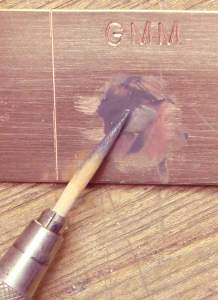 … which can have its uses!

No-Name Brand (Engineered Abrasives) –  Another stone that broke down pretty quickly, but worked fine. If you run across such inexpensive stones at your local hardware or tool supplier, it might be useful to acquire them. 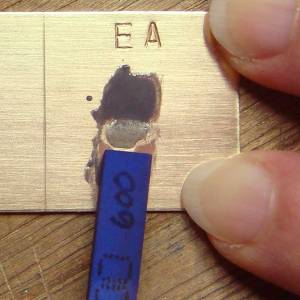 RESULTS – The Tam O’Shanter Hone was the only stone that had been pre-shaped. It had been worn down at an angle on the end, so it rubbed a nice flat area on the top of its solder blob(marked TAM on the left below). The other three stones had not been shaped (plus the Ceramic Stone is very small so it rode up and down over its blob), so there are more marks on the copper around all those test blobs. If you click on the picture below, it will open up a larger version in a new window, and you’ll be able to see a bit more detail. The three synthetic stones used are all 600 grit. You can clearly see the marks of the ceramic fibers in the blob of solder marked GSS (Gesswein Super Stone), but other than that, the surfaces look pretty similar. GMM is Gesswein Moldmaker, and EA is the no-name brand with “Engineered Abrasives” printed on them.

As the fineness of the Tam O’Shanter Hone is somewhere in the 600 – 800 grit range, I extended my test by using a couple of 800 grit stones and a 1200 grit stone – working at 90 degrees to the original tests.

Here is the blue 800 grit NSS Ceramic Stone in use, with a side-by-side picture comparing the 600 grit marks (left) to the 800 grit (right):

Below is the 800 grit no-name brand of Engineered Abrasives in use, with a side-by-side picture comparing the 600 grit marks (left) to the 800 grit (right): 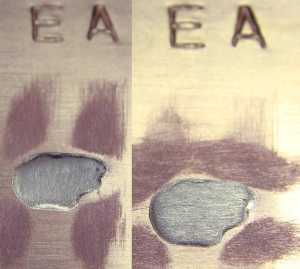 The fact that you can’t see much, if any, difference in the marks made by 600 and 800 grit may be due to the limitations of my camera vis-a-vis close up images, or it might just be that there isn’t a whole heap of difference to be seen.

I also tried out the 1200 grit Gesswein Ultra-Soft Polishing Stone on the GMM solder blob:

Brass brushing afterwards with soapy water reveals a nice shine on the top of this blemish, with only minimal effort and two Gesswein stones (Moldmaker 600 grit, Ultra-Soft Polishing 1200 grit). If you want to remove all the vertical marks left by the first stone, a bit more elbow grease with the second stone would be required.

After using 1200 grit Ultra-Soft and brass brushing with soapy water. Vertical marks are from the 600 grit Moldmaker stone used first.

I would say that the solder blob finished to 1200 grit with the Gesswein Ultra-Soft Polishing Stone is, predictably, the smoothest and shiniest. Next after that is the finish left by the Tam O’Shanter Hone. The 800 grit Gesswein Ceramic Stone and the no-name brand produced similar matte finish results, with a few deeper marks in the Ceramic Stone blob from the alumina fibers.

If you need to clean up really tiny areas, definitely consider a selection of the Gesswein NSS Ceramic Stones. Be sure you have a holder of some sort, like my Staedler lead holder. Gesswein also sells sets of the tiniest ceramic stones with a holder.

Larger areas, or flat surfaces, will be better served by larger stones, which can be shaped with an old file into handy cones (like a pencil tip), knife edges, or other profiles to best fit the area you need to work in.

Wow. You read all the way to the end!

P.S. Did a friend forward this post to you? Did you stumble on it by accident?  Want to eliminate the element of chance? Click here to get on my direct list.

P.P.S. More on the history of Tam O’Shanter Hones:
Dalmore House and Estate – site of the mine
Straight razor aficionados geek out on various Scotch stones

13 Responses to The Elusive Tam O’Shanter Hone… Mourning the Loss… Seeking a Substitute.